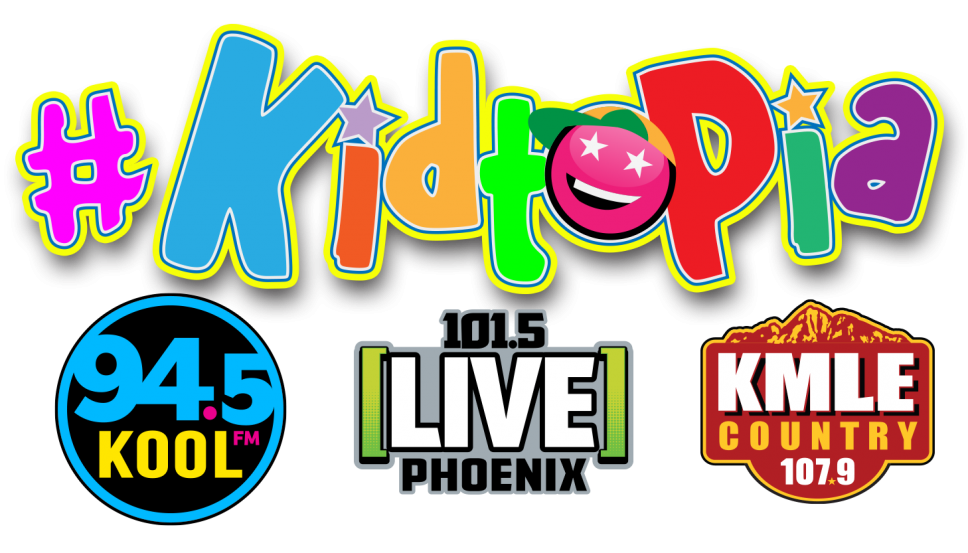 Your kids can check out giant inflatables, selfie galleries, sports activities, games, amusement park rides, a petting zoo, and SO MUCH MORE!

Get ready for Arizona’s coolest interactive festival built for kids!  Your kids can check out giant inflatables, selfie galleries, sports activities, games, amusement park rides, a petting zoo, and SO MUCH MORE!

We are excited to have New Hope Club hanging out with us.  You can find them doing a public meet and greet or you can get in on one of our exclusive backstage parties. Of course, they will be performing on our #KIDTOPIA stage.

With the release of their debut album, New Hope Club aim to empower their audience to pursue their own dreams with similar tenacity. “This album comes from a deep place in our hearts, and we hope our fans can see their own lives in it,” says Blake. “And when people hear a song like ‘Permission,’ I hope they say to themselves, ‘They did it, so I can do it too.’ We just want to uplift and inspire everyone, especially as they’re starting to become their own person and figure out what they really want from life.”

We will have a performance by local “School of Rock” artists The Twits!  Based out of Phoenix, Camden and Recker formed 'The Twits' in February of 2018 after being introduced by their mutual mentors, and owners of School of Rock AZ, Shane and Megan Baskerville. Their friend Aiden (also a School of Rock student) became the band’s newest member in December of 2019.

Too Loud Band is made up of Andrew, Reno, Joey & Vedder. United by their love of rock n’ roll and their desire to change the world with music. Too Loud Band plays music that inspires them to BE BRAVE, BE FEARLESS & BE LOUD! Follow Too Loud Band on Instagram @2loudband

We have special guest appearances by Red Titan Ryan and Combo Panda from Ryan’s Toy Review.

The YouTube sensation Ryan from Ryan's Toy Review comes to life as an incredible costume character for live appearances! Ryan, the adorable preschooler whose toy review show launched on YouTube 3 years ago is joined by Combo Pando, the animated self proclaimed gamer panda.  It has more than 1 billion views per month and over 20 million subscribers, Ryan Toys Review is the most popular kids and family YouTube channel on the planet!  He is loved by kids and parents everywhere and has a best selling line of toys and merchandise.

Our friends from Wildlife World Zoo will be doing an educational set from the stage.

Wildlife World Zoo, Aquarium & Safari Park has Arizona’s largest collection of exotic and endangered animals, with more than 600 separate species, rides, a petting zoo and daily shows!  We are excited to see what animals make an appearance this year.

We are all kids at heart, so grab yours and we’ll see you at #KIDTOPIA!

Your little girl can live out her FAIRYTALE PRINCESS dreams!  Meet Belle, Ariel, Elsa and Anna, Tiana, and Jasmine!   Join us for a PRINCESS SING-A-LONG and DANCE PARTY.  Belle will even have STORY TIME in Book Topia!

We’ve got you covered with the SUPER HEROES too!  You won’t want to miss Captain America, Superman, Batman, Spiderman and MORE!

Climb, slide, bounce and test your skills in a land filled with inflatable fun!  Bounces include obstacle courses, slides and more!

SHOW OFF YOUR SPORTS SKILLS IN SPORT-TOPIA! Show off you YOUR CLIMBING SKILLS ON THE MASSIVE Rock CLIMBING Wall! Shoot hoops with NBA SPRITE ALL-STAR SLAM DUNK CHAMPIONS Gary Smith and Kenny Dobbs!  THESE are just a few of the fun sports activities for everyone to score big at KIDTOPIA!

Get up close and personal with our pre-historic dinosaur friends!

ARTS & CRAFTS TOPIA Brought to you by Arizona Boardwalk

LET YOUR IMAGINATION RUN WILD IN ARTS & CRAFTS TOPIA. CUT IT, GLUE IT, FOLD IT, STRING IT, CREATE IT!  Kids can create cool crafts that they can bring home as souvenirs OR GIVE TO FRIENDS AND FAMILY.

LIKE DR. SEUSS SAID, “YOU CAN FIND MAGIC WHEREVER YOU LOOK. SIT BACK AND RELAX, ALL YOU NEED IS A BOOK! SO FIND YOUR FAVORITE BOOK, AND Join OUR DJ’S for story telling time! YOU CAN GRAB a bean bag chair and read one of your favorite books. Books provided by Gilbert Public Library.

ZOO TOPIA Brought to you by Quick Quack Wash

Stop by the petting zoo and get up close and personal with our FURIEST friends!

WALK THE RED CARPET just like your favorite artists.  Learn to be a DJ during our Scratch DJ training and HEAR yourself on the radio when you get interviewed by our personalities!

Ride the amusement park rides to your hearts content!

Temptations for every tummy will also be available for purchase at the #Kidtopia Food Court.

Get your tickets in advance!  Ticket prices will go up the day of the event.

#KIDTOPIA is brought to you by:

Legacy Traditional Schools
Legacy Traditional Schools puts the focus back where it should be: on our kids. It’s easy to see why Legacy continues to be the highest rated K-8 school network in Arizona. It starts with one student striving to be his/her best, and it continues to impact nearly 19,000 students network-wide. We hope you’ll take a moment to see why Legacy is the right choice for your family. Find your school at www.legacytraditional.org

A&W Root Beer
Bring home The Root Beer and introduce your family to A&W Root Beer. Enjoy a Original Root Beer Float or one of the classic flavors. Pick up a 20oz or 2 lt from your nearest Bashas’ or Food City  grocery store.

Town of Gilbert
Make your way to Gilbert, Arizona. Our welcoming town is just southeast of Phoenix and only a short drive away from the Phoenix-Mesa Gateway Airport. One of the best places to live in America, Gilbert boasts sunny weather, safe neighborhoods and  an exceptional school system, as well as a wide array of outdoor and cultural attractions.  Visit www.discovergilbert.com to learn more about the many welcoming accommodations available across Gilbert, Arizona.